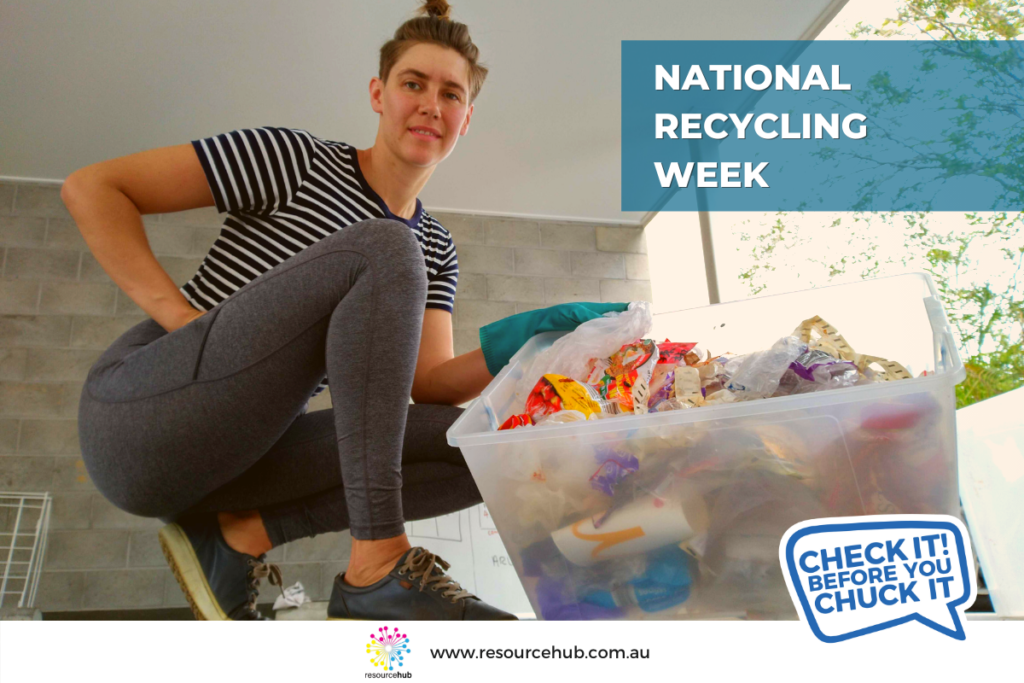 We developed our campaign based on the Planet Ark APCO CheckIt! Before You Chuck It. program that is designed to get Australian consumers checking for the Australasian Recycling Label on packaging and following it’s instructions. The program aims to reduce yellow bin contamination and the amount of recyclables going to landfill through better source separation behaviours in the home.

In order to use the ARL and accurately source separate according to the guidance, we identified precursor knowledge and behaviours that we focused our campaign around promoting:

During the week prior to NRW we promoted the upcoming behaviour change experiment primarily through Faceboook and Instagram and also through our monthly Resource Hub newsletter. We encouraged our audience to sign up for our NRW e-newsletter and complete our pre experiment (baseline) survey with the chance to win a prize. We also published and promoted a blog explaining the purpose of the experiment.
During NRW we delivered a digital campaign primarily through Instagram, Facebook and an opt-in NRW e-newsletter. We created content building upon the existing Planet Ark CheckIt! toolkit resources and added our Resource Hub touch. Our core campaign included three posts (1 x boosted), three 30sec CheckIt! animations, five 1-3min explainer videos, one 20min Facebook Live Q&A and one call-to-action CheckIt! Tuesday competition.

In the week following NRW, we promoted the winners of our two prizes, invited our audience to complete a post experiment survey (with the reward of free bin posters) and hinted about our data findings.

In addition to our digital campaign, we wanted to get some real data on whether the campaign had an impact on actual waste outcomes – mixed recycling contamination levels and the amount of recyclables in the waste bin. We engaged two households who vounteered to follow the campaign and let us check out their trash before and after NRW.

We collected qualitative and quantitaive data through three main channels:

We reviewed both the qualitative and quantitative data to understand:

The CheckIt! campaign and the ARL is great for the average Australian and our audience isn’t the average Australian. Knowing this about our audience indicates that next time, we would get strong engagement through targeting higher level waste conscious behaviours such as soft plastics recycling, home composting and utilising community drop off schemes for specific items like medicines and mobile phones.

For the delivery of a more comprehensive CheckIt! campaign over a longer timeframe, targeted at a broader (and less waste conscious) Australian consumer audience, we would offer the following tips:

Recently, Resource Hub was lucky enough to have the opportunity to support a Regional Council with preparation of their landfill provision journals as well as full cost price modelling.... 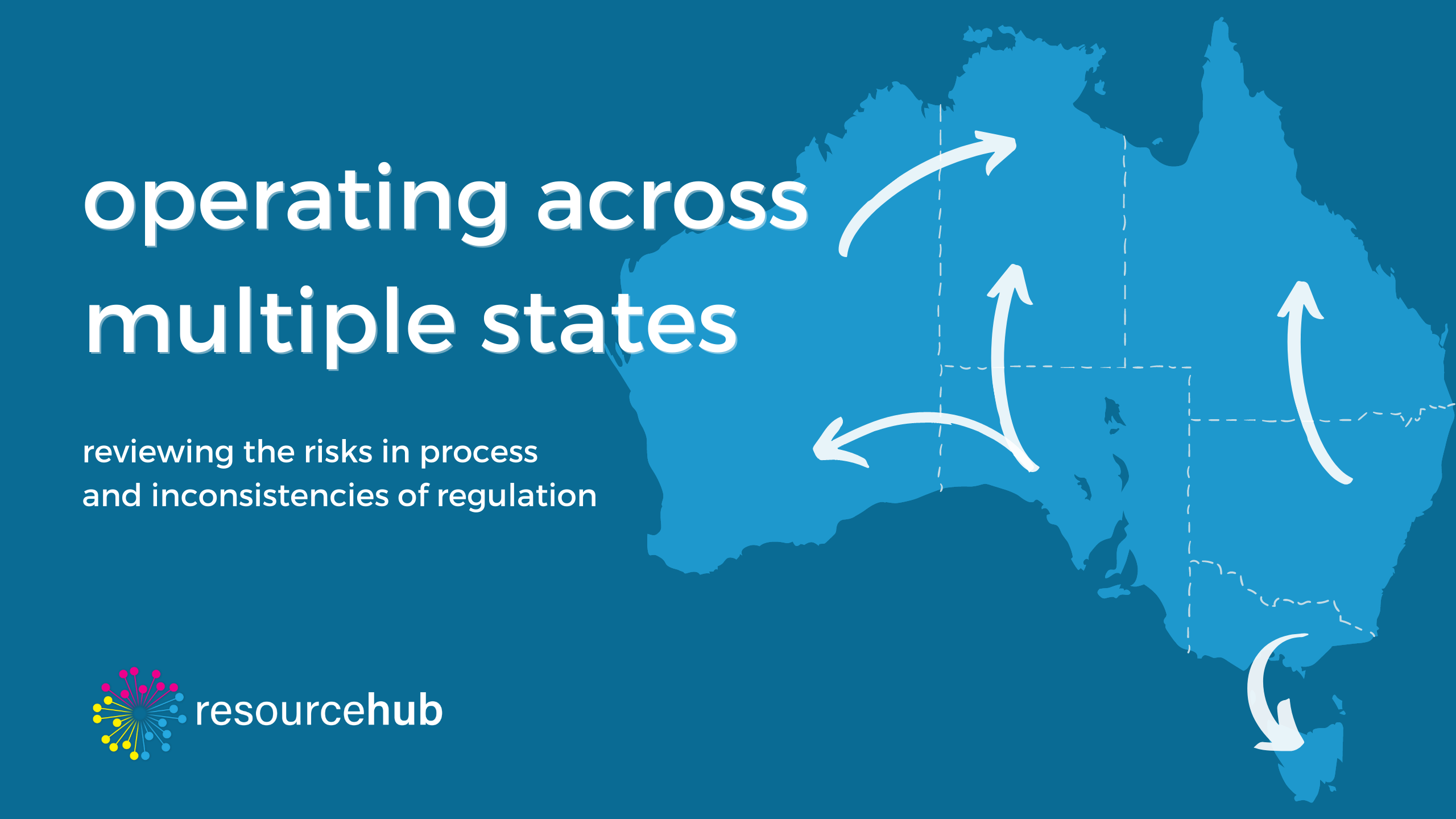 The challenges of operating across multiple states

Last month we had the opportunity to support a specialist waste facility operator to enter a new market, while also helping another to standardise processes across multiple states. One... 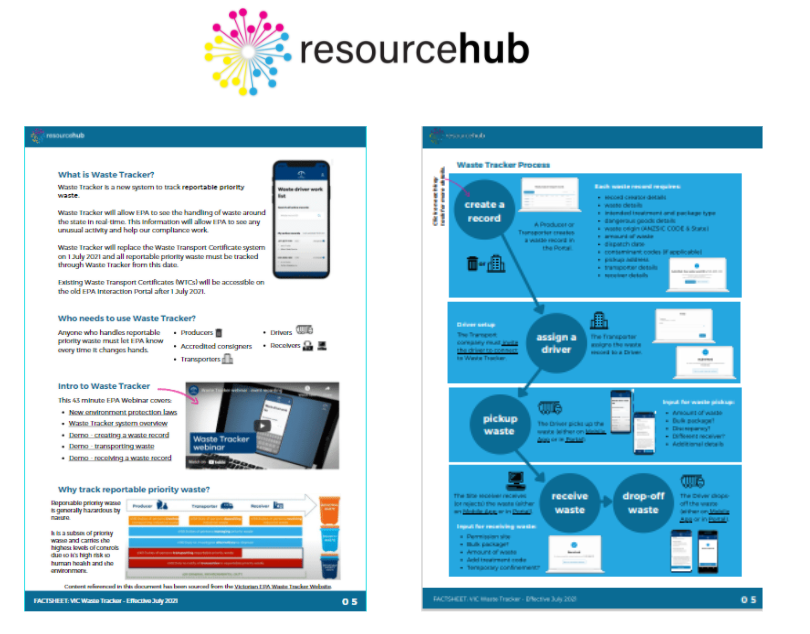 We've created a free Waste Tracker Factsheet to guide you through everything you may need to know. It's right below, so click the link to download yours! FACTSHEET WASTE...

We would love to hear from you, whether you’ve got a question or you’re ready to get a quote.

Experts in effective waste operation and regulatory compliance, with a passion for helping our clients do better business.

Subscribe to our newsletter to stay up-to-date with our latest insights and free resources.

Get our monthly Knowledge Share and our FREE resources directly to your inbox. You’ll be provided with tonnes of handy industry guidance and support in one handy little package!